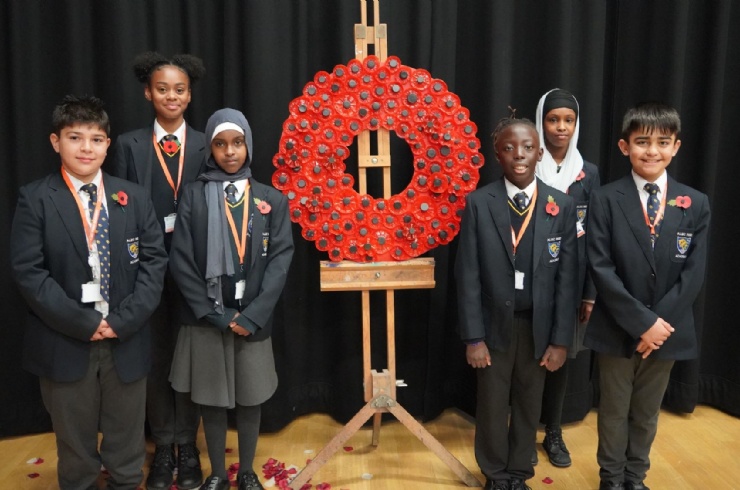 During this service, we remembered with sadness and respect the millions of people who have died or suffered injuries and harm as a result of war and conflict across the world.

The tradition of 'Remembrance' started at the end of the Great war in 1918.

Since that time, there have been wars all over the world that have led to both military personnel and innocent civilians losing their lives or suffering terrible injury and trauma.

At ARA, there are many people who have the privilege of never being directly touched by war- who don’t know first-hand the stress and strain of living in a place where bombing and gunfire are daily realities or of having a family member living away from home  in the middle of the fighting. However, there are people at our school who have witnessed war and conflict first hand – who may have lost family members and who will have had to cope with frightening and difficult experiences.

We have learnt about the soldier poets who tried to capture their experiences while on the battlefield on scraps of paper– one of them was a man called Wilfred Owen who sadly died 2 or 3 days before the peace treaty was signed- he was 25 years old.  Some students read some of his poems

In preparation for the service, Year 7 students collected plastic water bottles which were cut down and the bases sprayed red to look like poppies. These were then stuck onto a wooden 'wreath' and it was this that we used to lay in memory of all those who have died as a result of war both in the UK and across the world.

We also acknowledged something which is often left out of the history books and that is the enormous contribution made by the men and women of the Caribbean, Africa, India, and the Dominions. Many of these people served in the Armed Services, in Britain and overseas. Others were in the Merchant navy convoys, transporting cargoes which were essential to the services and civilians alike, and risking their lives to do so.

Finally, we must remember that many of these ex-service men and women settled in Britain after the Second World War. Britain needed them just as much in peace time as it had during the war. Britain had won the war; now it was time to win the peace. These people helped to rebuild British Society and there are many of us in the hall today who have older members of the family with memories of the War years.

During the service, and in the photographs you can see, hundreds of red and white petals were dropped on the stage, each represent a life lost to war in past conflicts.

If we dropped one petal every second from 11am on the 11th of November this year, it would take until 11th June next year to drop one petal for every one of the estimated 17m lives that were lost in the First World War. That is a total of 6 months dropping petals.

If we were to drop a petal every second, for every life lost in wars since 1918, it would take until 11th June 2024 to commemorate the estimated 180M people who have died in conflicts across the globe in the last century.

At the end of the service, we stood and observed a two-minute silence, when we thought about all the men and women, boys and girls who have died for their country and for basic human rights, particularly those who died between 1914-1918.